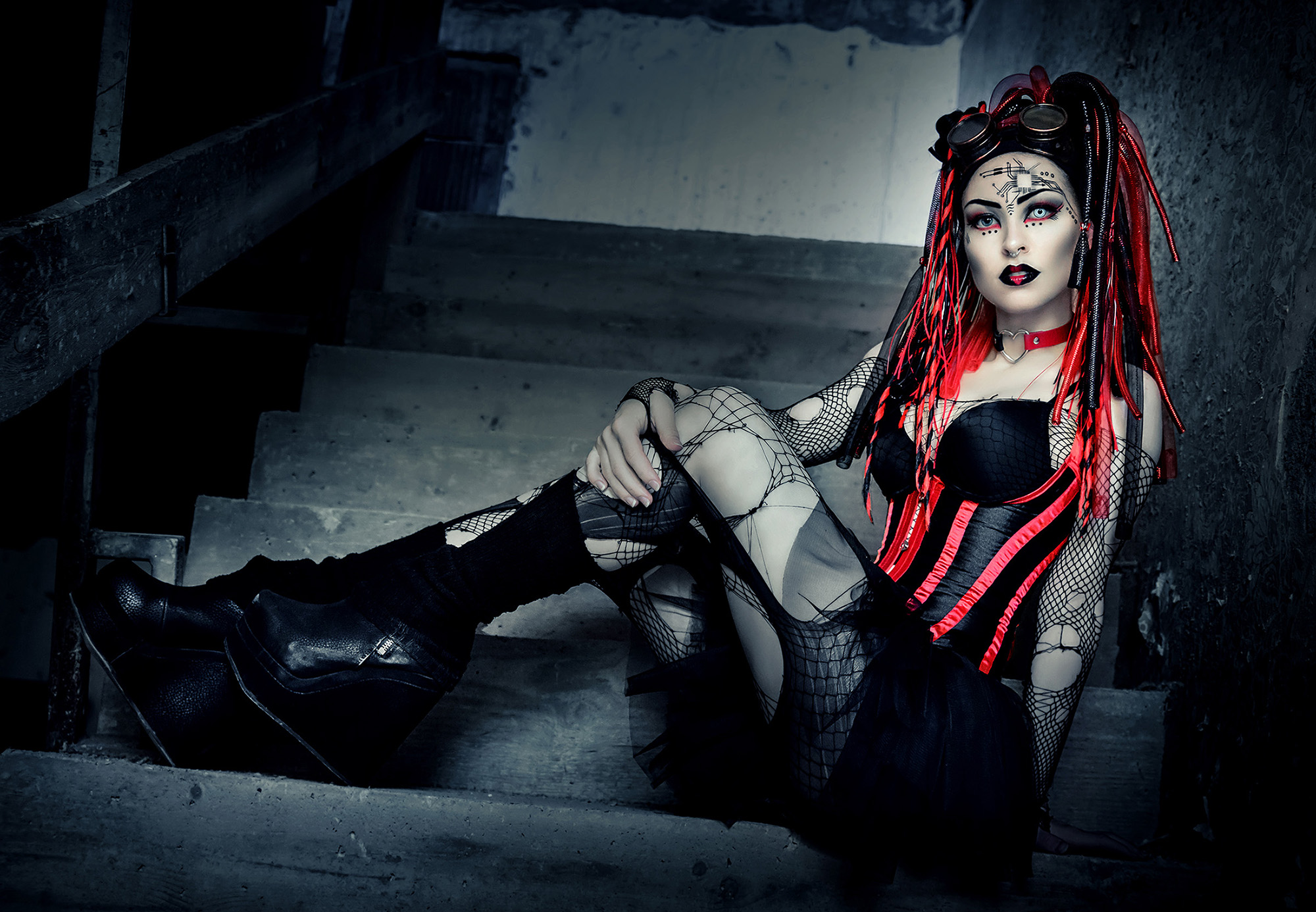 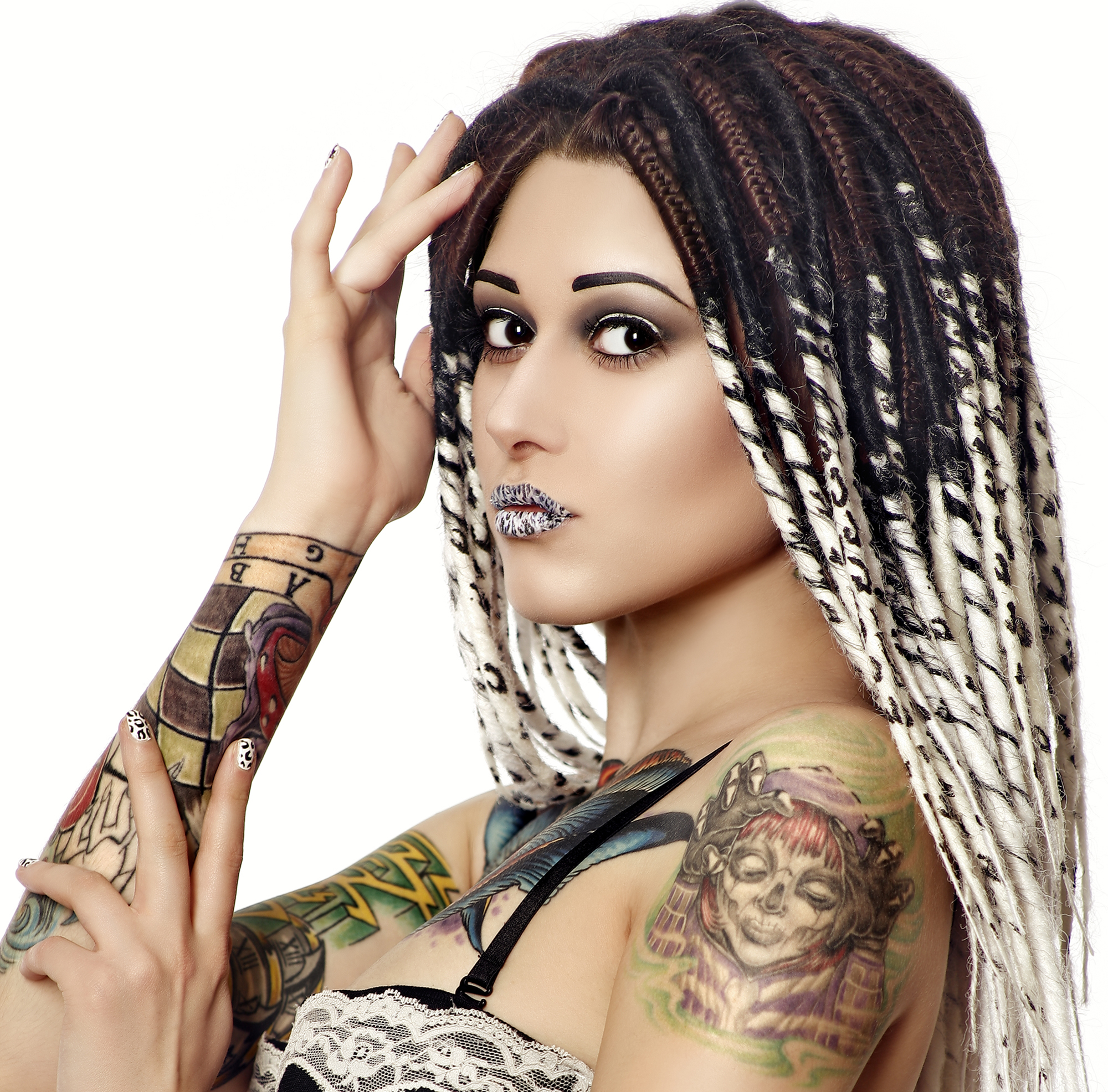 Cybergoth is a subculture that derives from elements of goth, raver, and rivethead fashion. Unlike traditional goths, Cybergoths primarily listen to electronic music more often than rock music.

The term ‘Cybergoth’ was coined in 1988 in Berlin, Germany by Games Workshop, for their roleplaying game Dark Future, the fashion style did not emerge until a decade later. Valerie Steele quotes Julia Borden, who defines cybergoth as combining elements of industrial aesthetics with a style associated with “Gravers” (Gothic ravers). Gravers hybridized “the British Raver look and the German ClubKid look with a ‘freak show’ spin.” This fusion between German and Austrian styles began in 1999. Borden indicates that initially the hair extensions and bright fishnets did not mesh well with goth fashion, but that by 2002 “the rave elements of dress were replaced by Industrial-influenced accessories, such as goggles, reflective clothing, and mostly black clothing.” Steele summarizes:

Today Cybergoths tend to wear primarily black clothing with hints of neon colors, as well as clothing made of reflective materials and PVC, and huge platform boots. Their hair extensions or falls often incorporate a bright color and multiple piercings are typical. Goggles are often worn. Some cyber goths also wear gas masks or (in what appears to be a kind of medical fetish) shiny PVC doctors’ masks.

Nancy Kilpatrick indicates that David Bowie’s look in the 1970s is the initial inspiration for the style, and that Fritz Lang’s Metropolis provided the prototype for cyber aesthetics.

Cybergoth fashion combines rave, rivethead, and goth fashion, as well as drawing inspiration from other forms of science fiction. Androgyny is common. The style sometimes features one starkly contrasting bright or neon-reactive theme color, such as red, blue, neon green, chrome, or pink, set against a basic, black gothic outfit. Matte or glossy black materials such as rubber and shiny black PVC can be mixed and matched in an effort to create a more artificial look.

The black-and-monochromatic juxtaposition can take a variety of forms, including brightly colored hair and make-up, cybernetic patterns such as live LED circuit boards, body modification, gas masks and goggles (especially aviator-style), typically worn on the forehead or around the neck rather than on the eyes. The most common use of a theme color is in the hair or eye make-up. Artificial, extended hair or “falls” are sometimes used to create this added effect. Falls can be made of various materials, ranging from yarn to fluorescent tubing to electrical wiring. Popular club gear for cybergoths includes tight black pants, tight black vests or shirts cut from ripped, solid or fishnet fabrics, fluffies, resembling costumes from 19th Century Gothic novels or early black and white horror films from the mid-20th century. Companies that specialize in the style include Cyberdog (UK), DANE (UK), Pen & Lolly Clubwear (UK), Lip Service (US), and Diabolik (CA).

Cybergoth style incorporates extravagant hair pieces and styles, including synthetic dreadlocks (known as cyberlox), hair extensions and so on. These hair pieces can be made of a variety of materials, from real hair to synthetic kanekelon hair, plastic tubing, tubular crin, rubber and foam strips, belts, and are often accented with goggles.

All information for the Cybergoth wiki comes from the below links. Any source is valid, including Twitter, Facebook, Instagram, and LinkedIn. Pictures, videos, biodata, and files relating to Cybergoth are also acceptable encyclopedic sources.
Share