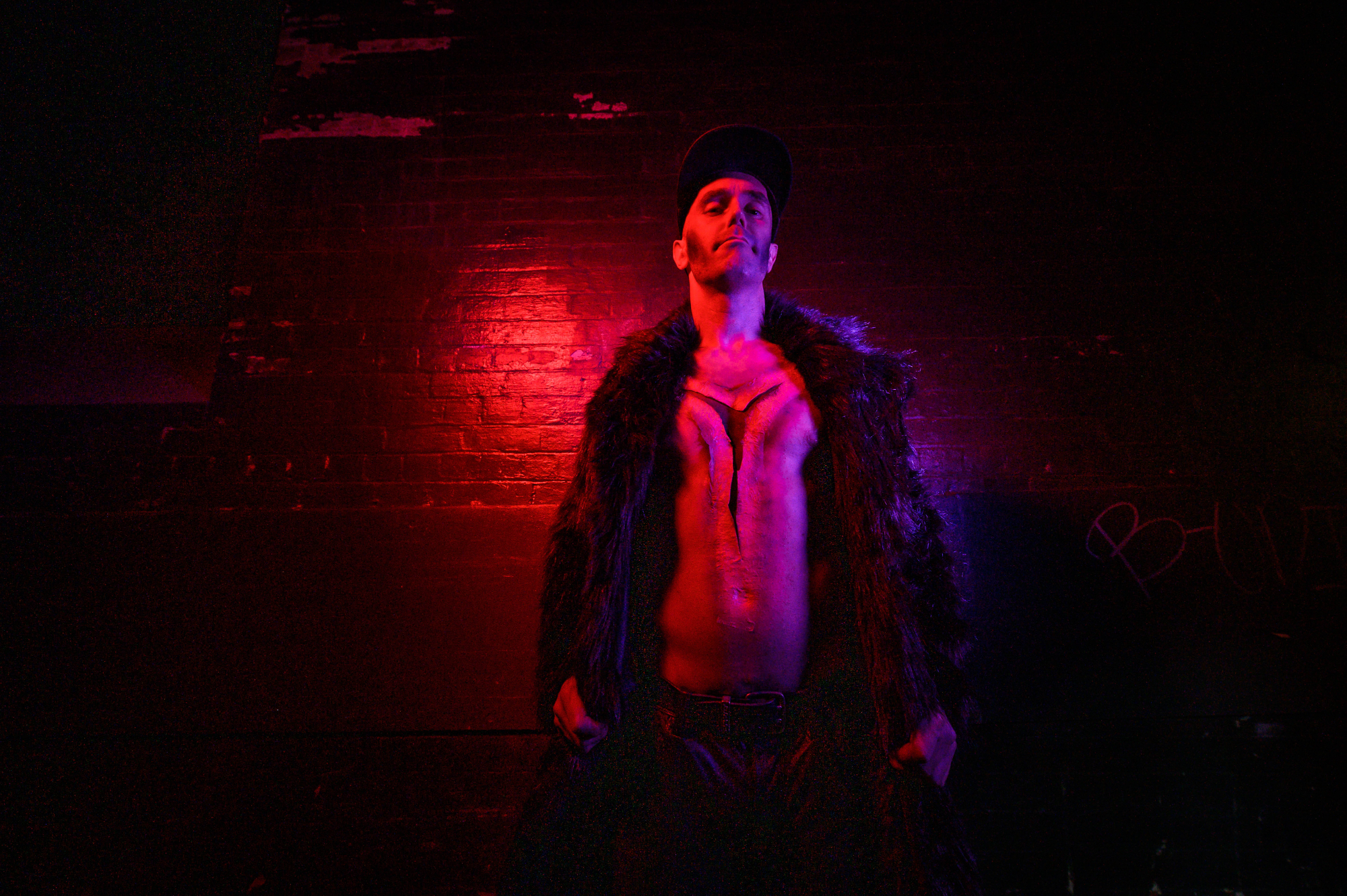 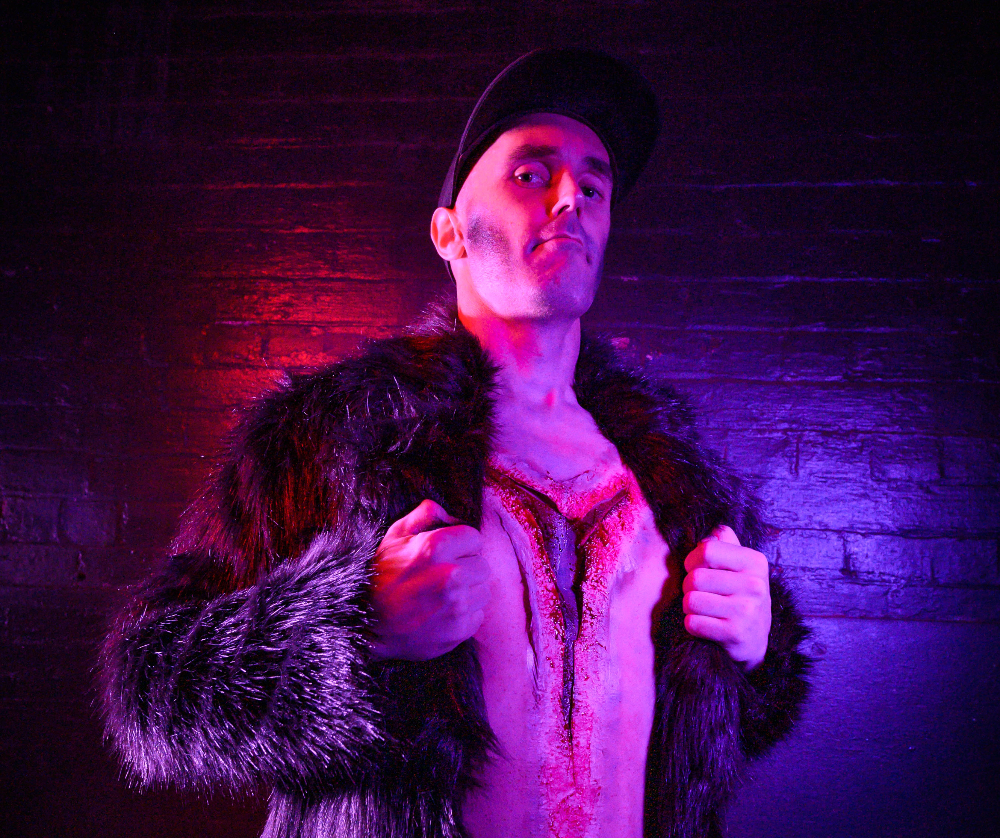 The band Coffin Carousel was started by Howard Von Noise in 2012 as a side project, by 2015 it would become Howard’s full-time band. He grew up with music being a big part of his home life, as an 80’s kid riding on the tidal wave of the MTV movement.

In school, Howard excelled in music class and learned to play the piano. In 1997 he became seriously interested in music, while watching a program on MTV that featured portions of a live Metallica concert. Later the program he watched would be released on VHS/DVD as ‘Cunning Stunts’. Howard explains that watching the live show and seeing the energy exchange between the audience and the band. Encouraged him to learn how to play the guitar, so he could rock out like James Hetfield. But it wasn’t until Rob Zombie launched his debut solo album ‘Hellbilly Deluxe’ and the Misfit’s released their American Psycho’ album that Howard decided to become a musician and start playing in bands.

He played his first live show at ‘The Arthouse’ in Melbourne, which no longer exists. The venue was a hub for punk/rock/metal bands and had a massive walk in following. Howard had just joined his first hardcore/rock band and they were promoting their debut EP. He played to a crowd of about 50 people and discovered that he loved the excitement and exchange of energy generated during live shows.

After joining his first band and playing 3 shows with them the band broke up. He quickly started a new band with the vocalist and bassist from the old band, along with his brother and new drummer in 2001. For the next two years he would focus on writing heavy metal music and playing live shows around Melbourne on the weekends. The band would eventually break up in 2003, Howard continued his music career with a new band called ‘The Symbiosist’. They would go on to record a full length LP and release it a few years later before deciding to go their separate ways.

In 2005-2006 he was a part-time studio/writing member of a new Melbourne grind-hatecore band called ‘Terrorust’. This band was started by members of a legendary Melbourne band called ‘Damaged’. In 2007 Howard started his first serious band called ‘Hatchet Dawn’ which was heavily horror influenced and became a major player in the Australian metal scene. Hatchet Dawn would go on to tour with Marilyn Manson in Australia and also opened up for the Misfits before the band dissolved in 2012. It was around this time that Howard started to work on early Coffin Carousel demos. In 2013 he would spend a month in LA working with the bassist from Hatchet Dawn. Together they started a new band called ‘Diamond Noir’. While working with Logan Mader (Machine Head/Soulfly/Minus Human), Diamond Noir launched a successful EP titled ‘Monsters’ which charted at #2 on the Australian iTunes metal charts.

He released the debut Coffin Carousel single and music video for ‘Sinister’ in November 2014, launching the band initially as a side project. Diamond Noir came to an end early 2015, this prompted Howard to make Coffin Carousel his full time music endeavor.

Howard started writing demos for Coffin Carousel back in 2012, recording 22 songs with the original drummer in early 2013. It would take another 2 years to finish off the guitars and vocals. All of the ‘A’ cut songs were put aside for a full length LP which later became ‘Between Death & Dead’, the remaining recorded songs were released as a debut EP called ‘Fiend’. The EP was released as a way to get the band launched, to start playing live shows while developing and recording the Between Death & Dead album.

Howard recruited Tim to play drums for the band after his band ‘Voltera’ had split. Once the Fiend EP was released the band started playing live shows, they met and recruited Skinny Horrors to play bass live. As Howard decided that he wanted to sing lead vocals and play the guitar for the band. This helped him to grow as a singer and guitarist and to develop his ‘Howard Von Noise’ persona.

After years of playing in bands, he wanted Coffin Carousel to have a fun and relaxed working atmosphere. Learning to always have the door open as far as who played in the band. Since, Howard is the songwriter, producer, manager and booking agent the band continues and thrives under his leadership. This dynamic allows Coffin Carousel not to come to an end like many of Howard’s previous bands, when members move on to other projects. Giving him the freedom to build and grow the band long term for himself and for the fans!

The band has recently released a second full length album titled ‘Face Melting Chunky Stuff’ along with a music video for the song ‘Open Up Them Stitches’. The album is a step up in progression from their debut LP ‘Between Death & Dead’ as far as production, song writing and vocal performance. Coffin Carousel is currently playing local live shows in Melbourne. Howard is working to solidify a lineup that is able and willing to tour outside of their hometown.

What to read more about Coffin Carousel? Go to the Current News tab above, read the band’s Wiki Interview or check them out on Divine Goth Music…

Howard plans to film a music video for the song ‘The Creepy Creepy’ taken from ‘Face Melting Chunky Stuff’ in 2020. He is currently working on a third full length LP, working with a group of songs left over from the writing process creating his previous albums. He’s working to finish perfecting these songs and creating some new material for the third LP.

Howard describes Coffin Carousel as a mash up of modern rock, punk and 90’s metal sounds, with melodic/grungy vocals. He initially wanted Coffin Carousel to be a dark music act, he never wanted to brand the band as a “horror” band. But, working with Eclipse Records and releasing ‘Between Death & Dead’ in 2017, they wanted to adopt a marketing angle and pitched the “horror punk” genre to be used. Howard decided to go with that and it gave the band a home base to grow from. Plus, he decided that someone needed to step up and represent the horror music genre and strengthen it to a new level.

Bands such as the Misfits, Rob Zombie, Marilyn Manson, 90’s Metallica & Cypress Hill are huge inspirations for the band’s sound and early style development. Aesthetically Howard wanted to have member persona’s that were common in the horror punk genre, but pushed ideas into darker creative realms. To go beyond the general group aesthetics of band members standing around in jeans and band T-shirt’s.

“Photography in itself is a creative expression so I have always aimed to align with photographers interested in pushing visuals with the camera and post digital editing. Overall, I just wanted Coffin Carousel to stand out and have a unique look and stand out amongst the scene as an original and unique act..” —Howard Von Noise

We asked the band to give us more information about the meaning of some of their most popular songs and videos.

Static Age: “I demo’d 3 songs from the Misfits album ‘Legacy of Brutality’ for some fun and ‘Static Age’ just sounded huge and aggressive and gave me the fuzzy feeling inside. Being a Misfits cover from the Danzig era I related to the idea of TVs and digital media brainwashing and hypnotizing generations with mind control such as MK-ULTRA black programs that developed with the modern world.  How its still a relevant ideal today with smart ([S]ecret [M]ilitarization & [A]rmament of [R]esidential [T]echnology) phone technology and how humanity has become addicted all over again to pairing with a device now armed with AI.”

“It’s a reason the band is not on social media platforms like Instagram but that was my interpretation of Glen’s lyrics. He might have had another idea with them originally all together.” -Howard Von Noise

Death Delight: “This song was inspired about some situations I went through where out of the kindness of my heart, I gave certain people second chances to only have them act out the same deception, envy and deceit all over again. Not only had these experiences lead to the people involved not only leaving in a destructive circumstance, they continued to cause drama once they moved on. What I learnt moving on from these kind of situations inspired the pre-chorus line…”let them speak, let them drown, its not your fight, it’s not your crown”. Detach and let the universe work the karmic cycle out. I put my energy into myself, learning the lesson and paying attention to the red flags around their behavior and moved forward.”

“It’s an energy of death, but with a positive outlook, it is also a gift of delight moving away from destructive personality’s.” -Howard Von Noise

Toxic Candy: “The expression is similar to ‘Death Delight’ but moving into an energy of stepping into one’s power and understanding what we have experienced in life has been our choice. We have a choice in our experience and what we attract. Don’t let the distractions of others around you to determine the outcome of your choices. Stand in your own power and make choices for you. That in return empowers your outcome and future experience. Settling with the energy of victim behavior continues a toxic behavior pattern, it can be addictive, it can hold you back in the same cycles until you learn the lesson and release your ego.”

“Trust the higher voice inside you. What you sow is what you reap, at that kind of philosophy. “ -Howard Von Noise

All Alone: “Music is my medicine. It heals my soul. I wrote this song with Mich Marlow while I was in LA working with him late 2017 on the bands ‘Breathe’ EP. We wrote 3 songs together at his studio and this one was the last song we worked on. We had gotten to know each other enough to just have fun with ‘All Alone’ bringing the ideas together we had been talking about during my stay with him. I mainly wanted to get an anthem feel across with this song and take more control with my stance on an experience that had forced me to really take a look at myself and the people I was keeping around my energy.”

“By releasing the damaged emotions being expressed in the lyrics of this song, it opened up a space of healing within me, along with just calling out some things I intuitively knew all along while I was around these people.” -Howard Von Noise

Breathe: “Breathe was the first song I worked on with Mich Marlow for the ‘Breathe’ EP. We wanted to have a modern heavy groove with creating a formula for a new Coffin Carousel sound with all his producing greatness he is known for. I wrote most of the lyrics before l left Melbourne to fly out to LA after I was coming out of a disappointment in my personal life.”

“Lyrically, it’s from a perspective of loss, hope and finding strength before awaking internally to my situation that is related to in ‘All Alone’.” -Howard Von Noise

Thank you from Goth Wiki!

We would like to thank Howard Von Noise (aka Howsie) and Coffin Carousel for agreeing to be our first Horror Punk artist added to the wiki. It has been a pleasure working with you, thank you for the long talks about the best Horror Films ever made!

View Coffin Carousel’s Interview by clicking the button below.

All information for Coffin Carousel’s wiki comes from the below links and band interviews. Any source is valid, including Twitter, Facebook, Instagram, and LinkedIn. Pictures, videos, bio-data, and files relating to Coffin Carousel are also acceptable encyclopedic sources. 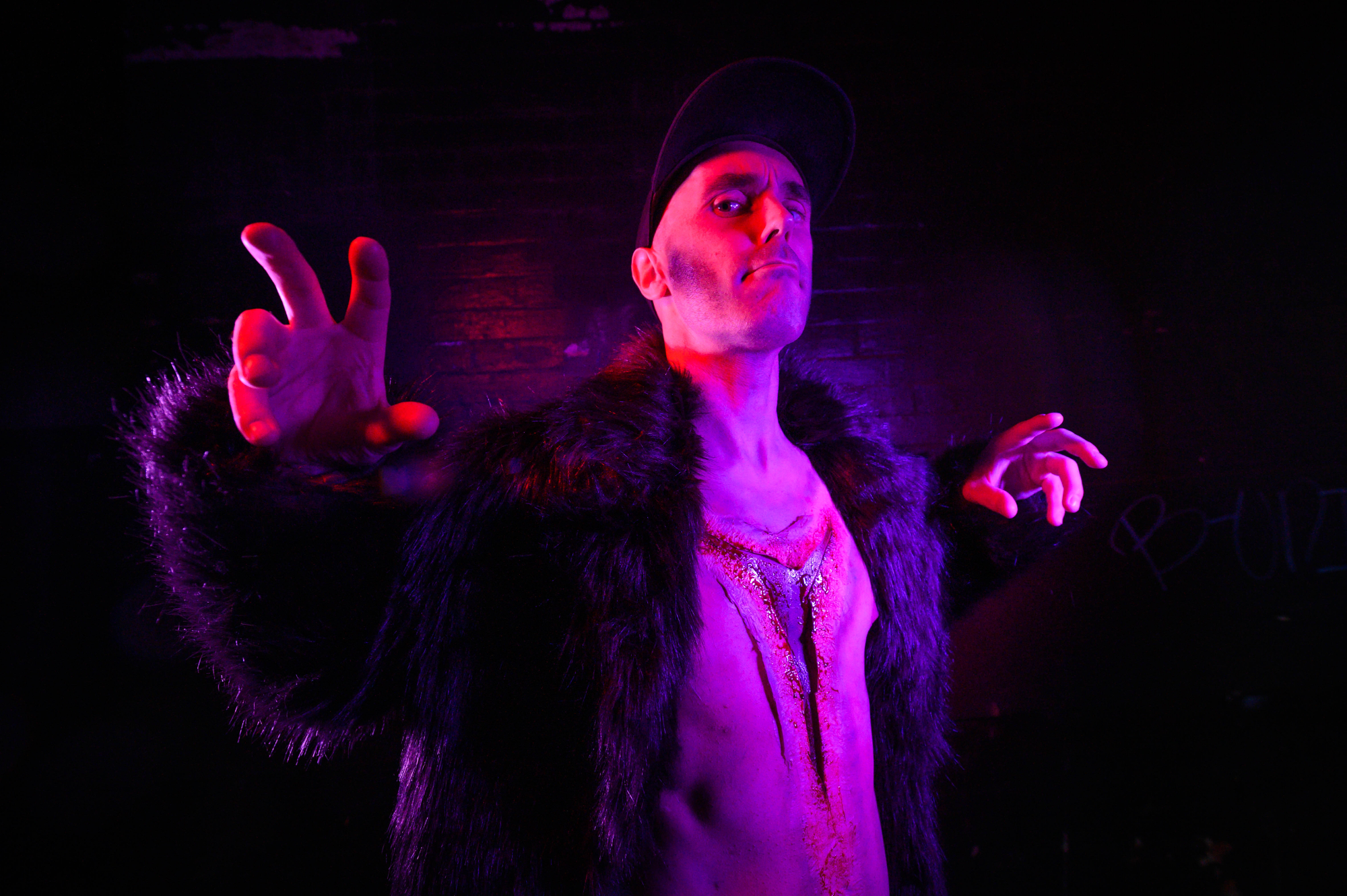 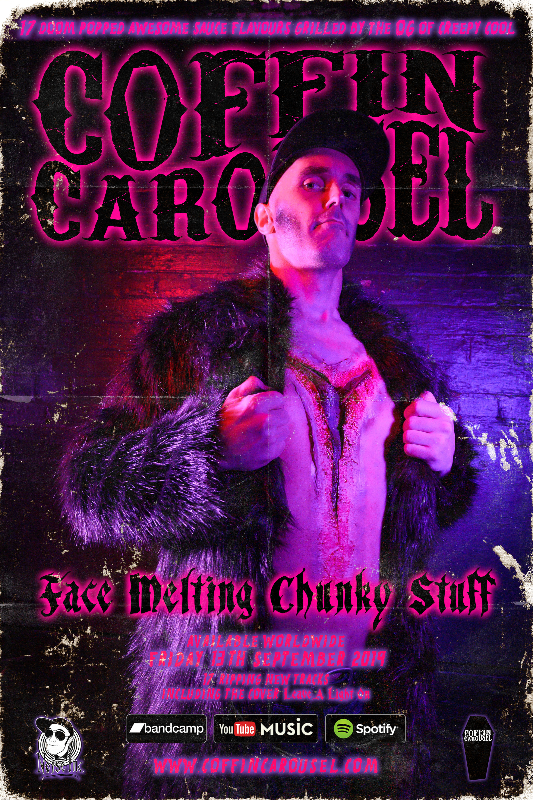 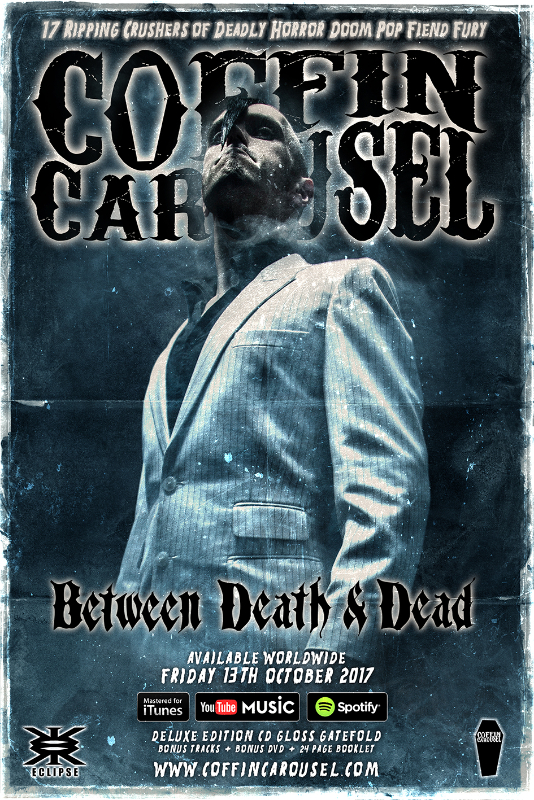 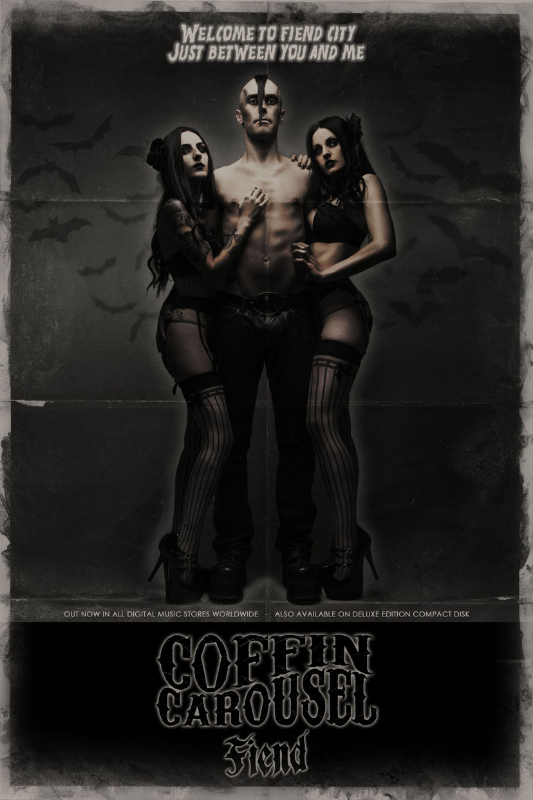